4-STARS
“Cape Disappointment. Now that’s a title! With an easily discernable lineage from the likes of Steve Earle and Dylan, even at times invoking Tom Petty–disturbingly so in “The Clothes of a Dead Man”–Semer’s lyrics crash like waves over the rocks of this album, describing people, their struggles, their gods. It’s sober and deep, occasionally rude. “Profile Pic” flirts with sailor sea shanties behind an americana arrangement and does not hide its sing-along qualities found in the best Irish bands. A great album for difficult crossings.” (Translated) 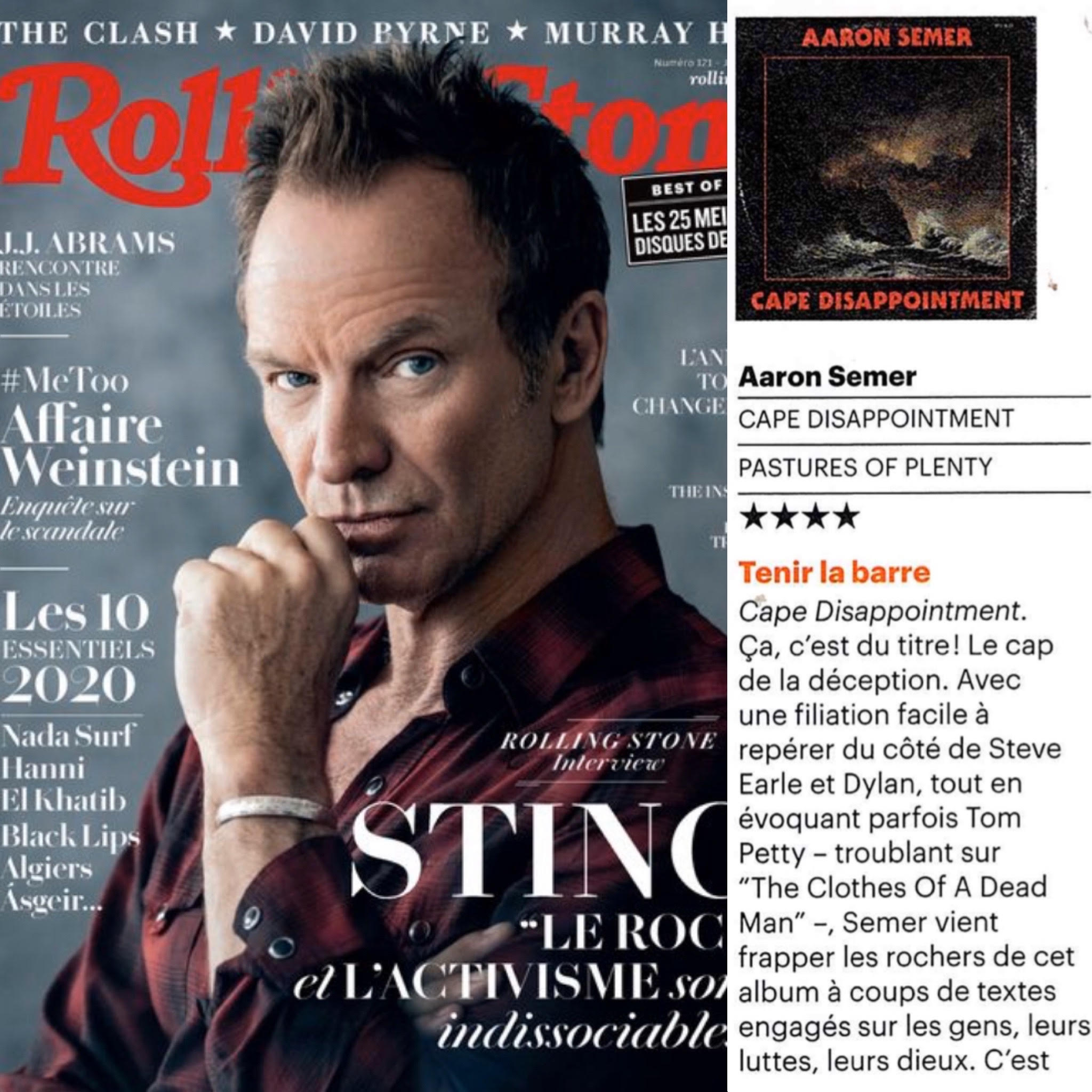 “Cape Disappointment, is a blunt, direct work on living and loving in our turbulent times… Aaron Semer draws from the tradition of the best singer/songwriters in that he can write about any variety of topics and make it all seem too easy. With Cape Disappointment, he deserves a seat at the table alongside Jeff Tweedy, Steve Earle, Warren Zevon, and John Prine. He’s that good.”
FULL REVIEW: PopMatters

#20 on The Best Seattle Albums of 2019 list:
“A gifted storyteller with an easygoing, guy-on-a-Ballard-barstool delivery, folk-rock singer-songwriter Aaron Semer unleashed this no-nonsense ‘midlife crisis album’ last month with echoes of Warren Zevon, Neil Young and Jeff Tweedy… Semer’s songs have a familiarity about them, like they’ve been a part of your life for years. Maybe they should be.”
FULL REVIEW AND LIST: The Seattle Times

“For every Starbucks in Seattle, there’s a singer-songwriter… or so it seems. It can be a chore to differentiate between the snooze-inducers and the real-deal artists. As the new album Cape Disappointment proves, Aaron Semer belongs in the latter camp… Semer’s authoritative acoustic-guitar strums and perceptive, gripping lyrics command respect. His songs bear a subtle gravitas and abound with vivid lyrical details, with shadings of Warren Zevon and Ian Hunter’s world-weary wit and emotional depth.”
FULL REVIEW: The Stranger

“Aaron Semer’s followup album to 2015’s Love Amidst Collapse, has us ecstatic… Cape Disappointment flows with streams of independence, love, and self-determination, fed by the hard rain of class struggle in his Seattle home. With a Midwestern blue-collar work ethic Aaron has created an album that flanks the onslaught of technocracy, with unifying folk-punk songs full of empathy, grit, and grace.”
FULL REVIEW: American Standard Time

#10 on the Top 10 Pacific Northwest Albums of 2019 readers poll.
“Semer’s call and response groove, bull’s-eye lyrics, and party kazoo are destined for greater venues… moves Semer from dime a dozen, bearded-singer songwriter to master songsmith biding his time before total domination… At times, isolated and towering, Semer’s style is easy as Sunday morning and the crush of ocean waves during a frightening night storm. However, just like the water’s reflective and illuminative qualities, Semer’s deeper parallels, activism, and collage of hard-knock tales reveal he’s lived a life despite the disappointments.”
FULL REVIEW: NW Music Scene

#10 on the Best of the Northwest list, 2019
“It’s easy to take the time-worn singer/songwriter template for granted. Then along comes this great collection of songs from Seattle singer/songwriter Aaron Semer, whose reedy, heartfelt tenor and stunning lyrical storytelling remind you that, sometimes, there’s nothing more timely—or timeless—than one eloquent voice and songs that speak truth to power, protest, and love.”
FULL REVIEW: Artist Home

“A troubadour for our troubled times and questioning minds… Semer’s style is straightforward and passionate and his new LP is chock full of his direct vocal delivery, incisive and relevant lyrics, and punchy to reflective, yet always tuneful compositions.”
FULL REVIEW: The Big Takeover

“Seattle-based (by way of Ohio) folk-punk singer-songwriter Aaron Semer serves up no-frills acoustic guitar-and-vocals-driven fare, which may sound too basic, but Semer nails it with his dryly biting vocal delivery and sharply perceptive lyrics about the dark and confusing times we’re living in.”
FULL REVIEW: Rebel Noise

“On his second full-length he certainly isn’t playing it safe by navigating into a comfort zone… Semer can get political without sounding callow while his personal stuff is sincere but not overwrought, which for a ‘midlife crisis’ LP is an accomplishment.”
FULL REVIEW: Vinyl District

“…By the end of the album you realize that this isn’t Americana, a term that’s become nebulous, but good old-fashioned protest music. It’s a new generation singing these songs, however, a generation a little wiser, a little more jaded, and far more witty.”
FULL REVIEW: Part-Time Audiophile

“If there were ever a song fit for the first dance at a wedding, [‘Settle In’] would be it.”
FULL REVIEW: Dan’s Tunes

“Wistful and gracious, ‘Settle In’ is the perfect soundtrack to falling asleep by the fireplace in the arms of someone who loves you.”
FULL REVIEW: Alternative Sound

“One listen to his lyrics, you find yourself entranced in every story sung. This is why you cheer for artists like him – He is the voice of what you want to say, but for whatever reason we do not. These are the songs we need to turn on and listen from start to finish.”
FULL CONCERT REVIEW: NW Music Scene

“Whether ranting against the hypocrisy of armchair activism in ‘(Little Black Square on My) Profile Pic’, or beautifully describing how ‘Settling In’ with a lover can cover a lot of psychic hurts and start new life, or telling an awesome historical saga wrapped in revolution and sex and death in ‘Bones For The Catacombs’, this full-length is all the way real and expertly realized.”
FULL REVIEW: NW Music Scene

“There have been a lot of excellent albums released this year, and one of the best records I’ve heard is Aaron Semer’s ‘Cape Disappointment.’ This one feels like a perfect record for where we are in life, at least for me and the folks I know, as we see ourselves aging, take stock in who we are, and wonder just what went wrong with everyone. These are songs with something to say, songs that will speak to you and perhaps for you as well.”
FULL REVIEW: Michael Doherty’s Music Log

“Semer formerly dabbled in power-pop with a bit of twang as a the frontman of The Plains, and on this sophomore album, he proves that he has the solo chops to draw justified comparisons to Lucinda Williams, Jeff Tweedy, or Steve Earle – yes, he’s that good.”
FULL REVIEW: Daily Vault

“The songs feature these filigrees and quiet detail that add a deeper layering to the album, and raise it above just another folk record. The droning notes on opener ‘A God That’s All Ours,’ the piano on ‘Settle In,’ or the pedal steel sounding guitars on ‘Rinsingsun, OH,’ all elevate these cuts.”
FULL REVIEW: Cinepunx

Press For “Love Amidst Collapse”

“It appears that Aaron is right on trend as the US falls apart into hatred and decay. I am excited to see him at a big anti-government music festival or a President Sanders celebration concert in the near future.” JIM TOOHEY

Read the full #41for2016 article at NadaMucho.com

“The songs on Love Amidst Collapse are both familiarly rustic and oddly unnerving, a strange brew of acoustic jams and vaguely hippie-flavored visions of hellfire and damnation… sounds like an occult Crosby, Stills & Nash, all acoustic guitar and soaring folk melodies laced with a general air of otherworldly dread. Love Amidst Collapse is a warm, accomplished folk record steeped in a strain of apocalyptic fever traceable in America at least back to the first Great Awakening. Semer definitely has ideas and some well-honed musical sensibilities, making him an artist to watch around Seattle.” JON ROONEY

Past Press for Aaron Semer and The Plains

“Ohio native Aaron Semer is blessing Seattle with his presence before catapulting to mega-fame… A major, multifaceted, and eccentric talent. A listener feels as if these songs have always been there, waiting for someone to discover them.” GRANT COGSWELL

“On the night of his CD release party, Aaron Semer (the man who taught John Darnielle how to emote) sang so hard he short-circuited his vocal cords–I’d be surprised if he wasn’t supping Jell-O and whispering for the next week. I found myself rediscovering songs I didn’t know I had loved.” KATE PREUSSER

“…as easily suited to treading an alley of urban decay as wandering a country road at dusk… Semer’s vocals carry an infectious twang and honest delivery that’s undeniably Midwestern and so elusive to many other singers. As in Jeff Tweedy’s or Tom Petty’s best moments, you can’t help but believe what the guy is saying… Religious and romantic idealism isn’t merely bruised from experience so much as it is pummeled into a new perspective.” DOMINIC AULISIO

“When I read Aaron Semer’s notes to [You Never Let Me Believe], he compared it to themes from Pink Floyd’s The Wall — it’s about the earthbound restrictions many educators impose on their students’ whims and musings. The fact that Semer wrote a topical song, but made it sound personal, speaks to his genius. He knows where he’s supposed to aim, the frequency listeners will respond to.” SHRUG

“Aaron Semer’s depiction’s of work-a-day life run rampant through the majority of his songs. His cynicism gives off shades of Quasi’s Sam Coombs, but in a less eloquent, more blue-collar fashion, taking the platform from indie rock to car-on-cylinders-in-front-lawn country. It’s that creative energy that not only [creates] a unique sound, but also helps make each song sound like a potential hit.”